Europe has been under the spell of Xanté for more than 10 years, but in 2009, Xanté finally unveiled its secrets and began to seduce the US. The premium liqueur Xanté is a perfectly balanced blend of sweet Belgium pears and cognac from specially selected French distilleries. Xanté is conceived with cognacs matured for four years in barrels made from the finest French Limousine Oak that draws out the rich amber colour and fragrant notes of spicy vanilla and pear. Xanté should be enjoyed chilled in a martini glass or in a shot glass cooled over a bed of ice to preserve its seductively smooth character. Xanté is a new experience with no preconceived notions or traditions. It is the perfect ingredient for a variety of pleasurable cocktails, so indulge your senses. Xanté contains no artificial ingredients. Its maturing process results in natural sweetening and allows the sugar content to remain at 17 %. Enjoy Xanté in the intimate company of your choice. Who knows? Maybe it will be the beginning of a lifelong affair.

During the Franco - Prussian War, Jean Heinrich, member of an Alsatian family, escaped to Namur, Belgium, where he was granted shelter at a Benedictine Monastery.

The monks confided Heinrich with a collection of ancient, all - natural liqueur recipes that would become the foundation of the legendary Maison Heinrich Liquoristerie Artisanale.Heinrich successfully commenced production, but decided to keep the single most superior recipe a family secret. It was solemnly passed on from generation to generation and perfected through accumulated knowledge, tradition and refined production techniques. And today – after four generations of blending excellence, the world is finally deemed ready for the unimaginable pleasures of Xanté.

The aroma of pears stewed with honey, banana, sultana (grape), vanilla and cinnamon entice you to try this succulent pear liqueur.

The first sip shows an oily, resinous mouth-feel with hints of wood spice and pears. Xanté is rich, creamy and tasty all the way to thefinish. In the end, Xanté is a bouquet of fresh sweet pears, caramel, nutmeg, lychee (tropical Asian fruit), vanilla, cinnamon and banana. 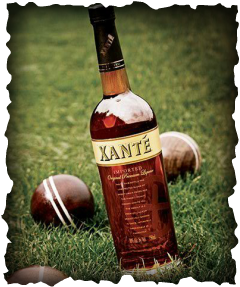 By clicking Enroll Now, you will be redirected to the Learn2Serve website. As the provider of this course, Learn2Serve will ask for personally identifiable information required by TABC and necessary to complete the course. Clicking Enroll Now will not charge you any fees; however you can refuse to be transferred to this website.